With that simple telephone message from Anita Dorr to Judy Kelleher, the Emergency Nurses Association began its sojourn from infancy to adulthood.

In the East, Anita M. Dorr, RN, began in January, 1970 to meet formally with emergency nurses in the Buffalo, New York area to provide in-service education and improve communications among emergency nurses. That group called itself the Emergency Room Nurses Organization. Unaware of those meetings, Judith C. Kelleher, RN, met with 45 nurses in June, 1970, in Downey, California, and formed a steering committee to develop the Emergency Department Nurses Association with similar goals. 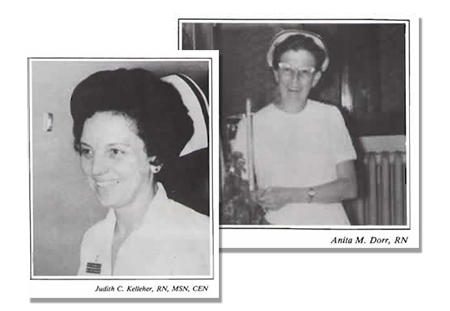 "I recall the day in August, 1970 when Anita called and asked if we could get our two groups together," Judy remembers of the events leading to ENA's formation. Through letters and more telephone calls, the details of combining the two organizations were worked out by October and on December 20, 1970, the Emergency Department Nurses Association was chartered.

During the course of these early efforts, other groups of emergency nurses were identified. Anna Mae Erickson in Washington, Mildred Fincke in Pennsylvania, and Ruth Miller in Florida were also developing emergency nursing groups. Together, this created the nucleus of today's ENA.

The first Board meeting was held on October 6, 1971, in New York City. Mrs. Dorr was asked to serve as Executive Director and Mrs. Kelleher served as West Coast Chairman as well as Chairman of the Bylaws, Resource and Education Committee. This was followed by a meeting of the first ten regional directors on January 19, 1972 in Somerset, New Jersey, as the guests of the Johnson & Johnson Company.

By 1972, the initial organizing efforts were largely complete. Officers had been elected, regional directors named, and the organization was preparing for its first national convention. On October 11, 1972, the bittersweet moment arrived. Nurses from 33 states and 3 Canadian provinces gathered in Buffalo, New York for "Challenge to Change: Chimera or Commitment?", the theme of that first conference. But only eight days earlier, Mrs. Dorr had died.

The years since have been extremely active. The national office moved from New York to Michigan before settling in Chicago in 1978. The first scientific assembly, a joint venture with the American College of Emergency Physicians, was held in 1973. The first issue of the Journal of Emergency Nursing was published in January, 1975. The first Core Curriculum was published, also in 1975. The first autonomous assembly was held in 1979. The first certification exam was given in 1980. The Blue Ribbon Commission findings were presented and accepted at the 1983 General Assembly. The organization's name was changed in 1985 to the Emergency Nurses Association, reflecting the variety of settings in which emergency nursing is performed. The first TNCC course was offered in 1986. The membership of ENA reached 20,000 in 1990.

These are just a few of the ENA headlines from the past 20 years. The following pages capture some of those moments which have made the Emergency Nurses Association a dynamic leader in nursing today.